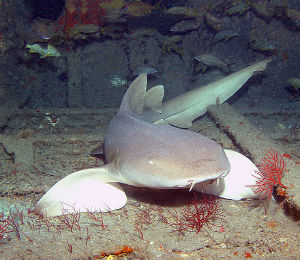 No Key West diving adventure is complete without a shark sighting to round it out. There is no reason for fear, though. Despite their fierce name, nurse sharks do not generally bother the snorkelers or divers who have the opportunity to admire them. There has never been a reported human death from a nurse shark. There have been rare cases - very rare - of a swimmer being bitten, and in those cases the shark likely felt threatened. In fact, this nocturnal species generally spends the day lounging on the sandy bottom in shallow water, giving lucky swimmers a great chance to view or photograph them unimpeded.

Nurse Sharks, also known as Ginglymostoma cirratum, are just over 4 feet long when full grown and weigh almost 700 pounds, definitely adding to their intimidation factor. Younger sharks can be significantly smaller. They are a dark grey color, sometimes with spots, and they are much less sandpapery to the touch than other shark breeds.

They also have a somewhat flat head, with a mouth on the underside of their head. Two dorsel fins emerge from the shark's back, and spiracles behind their eyes help them breath as they lay still, resting during the day on the ocean bottom. Their sleek appearsnce is completed by a long tail fin.

They often travel in large packs, which can be a breathtaking sight for swimmers. They give live birth, as the eggs hatch inside of them, and the pups are born fully formed. Up to 30 pups can be born in one litter, looking like miniature versions of their parents.

The nurse shark, like other sharks, has multiple rows of replaceable teeth and a strong jaw, which helps it to hunt. Nurse sharks are bottom feeders and one of the few animals that can hunt sting rays, though generally they prey on smaller ones. They also eat a wide variety of other sea animals, including crustaceans, small fish, lobsters and even live coral. They sometimes are heard making a sucking sound as they hunt, drawing their prey into their mouths. Since they are nocturnal, much of this hunting occurs at night when other, diurnal, fish are resting and therefore sluggish.

Nurse sharks are found in many countries all over the world, though they prefer very shallow coastal waters and generally stick to warm tropical or sub-tropical areas. They are most often found in the western Atlantic or eastern Pacific Oceans. They are especially common in the Florida Keys area, which has a huge amount of biological diversity for snorkelers and divers to admire. Though nurse sharks can dive down a couple hundred feet, they are more often seen in waters just a few feet deep. Though they should be treated with respect, divers in these parts of the world have no need to be afraid of this majestic yet gentle animal.