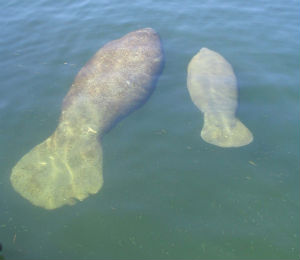 Those scuba diving in Key West can expect to see a large number of beautiful, exotic, and graceful animals. They can also, if they're lucky, catch a glimpse of Florida's beloved manatee. Often called a sea cow, these slow moving and bulky animals lack the sleek lines of dolphins or sharks, but make up for it with a charm all their own. In fact, the manatee is the official Florida State Marine Mammal.

Manatees live up to their nickname in their appearance. They are fairly ungainly looking with rotund bodies and paddle tails. Despite this, they come from the scientific order Serenia, since legend has it that sailors actually mistook them for beautiful mermaids. Adult manatees generally weight around a 1,000 pounds, but in extreme cases can grow to over three times that amount. Likewise, they are generally about 10 feet long but especially large animals can be as long as 13 feet. Manatee calves, when they are born, already weigh about 60 pounds. Adult females tend to be slightly larger than males.

Manatees are a grayish color and swim so slowly through the water that algae can actually grow on them. These mammals evolved from land animals and still have fingernails on their fins. X-rays of their fins also show a bone structure somewhat similar to human hands, demonstrating that what is now a single fin may have once been separated into fingers.

Though unfortunately hunting and motorboat accidents take a heavy toll on their population, in ideal conditions they can live into their fifties. In fact, the oldest known manatee is named Snooty and lives at the Parker Manatee Aquarium in Florida, having reached the ripe old age of 65. They are considered to be adults by about age 5.

Manatees are almost exclusively herbivores, though they have been seen to occasionally eat a fish. Due to their habit of chewing tough marine plants and grinding sand between their teeth as they do so, they wear down their teeth. Luckily, they also have the ability to replace them. The newest teeth erupt in the back of their mouths and move forward. They generally have no more than 24 teeth at a time, though they can have less. They spend about half their day eating and the rest sleeping, and can eat as much as 15% of their body weight in plants in just one day.

There are three different species of living manatees, each which live in separate parts of the world. There is the West Indian manatee, the African manatee, and the Amazonian Basin manatee. The specie that live in the waters around Key West is the West Indian Manatee. This particular breed likes warm, shallow water and can in fact die in water colder than 60 degrees. They can be found all throughout the Caribbean Sea and the Gulf of Mexico, though their numbers are decreasing due to illegal hunting and boating accidents.