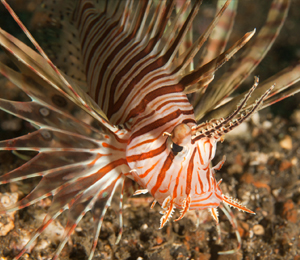 The lionfish is a tropical fish whose native habitat is the waters of the Indian and southern Pacific Oceans. Within the western Atlantic Ocean, including the waters of the Caribbean and surrounding the Florida Keys, the lionfish is an invasive species that has flourished since it was introduced approximately twenty-five years ago and has been found by divers snorkeling in Key West.

Lionfish are predators who feed off of the small fish and crustaceans that inhabit that inhabit the Florida Reef. Despite their beautiful red and white stripes, the lionfish typically averages twelve inches in length and sports numerous long, thin dorsal fins that can deliver a venomous sting to their prey and to humans as well. While painful and capable of causing nausea as well as potentially difficulty in breathing, swelling of the tongue, and a drop in blood pressure, the poison in the sting of a lionfish is rarely fatal. Given that these beautiful fish are territorial, quick, and aggressive, divers snorkeling in Key West and other areas on the Florida Reef are well-advised to give them a wide berth if spotted while diving or snorkeling.

Also known as a dragon fish, scorpion fish, and turkey fish, the lionfish typically inhabit the rocky crevices and seaward edges of coral reefs and can be found in cloudy or muddy water hunting for their next meal.