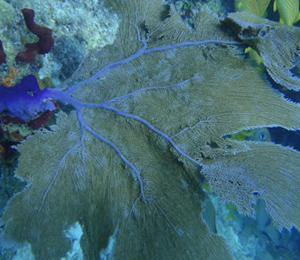 Situated about one mile southwest of Western Sambo, the Ten Fathom Ledge offers one of the most unique scuba diving experiences in Key West. As its name suggests, the site consists of a series of coral ledges with multiple coral caves and outcroppings that are just begging to be explored. Unlike other popular locations in the Keys, Ten Fathom Ledge is much deeper and provides a more complex dive to excite even advanced divers. Although the overall site average is only between 25 and 50 feet in depth, the ocean side of the reef ledge dramatically falls from 50 to a maximum of 130 feet.

Diving at Ten Fathom Ledge offers one major distinct advantage andndash; the Gulf Stream. While it does produce a rather powerful current to make diving a little challenging, it makes for unparalleled visibility throughout most months of the year. As a result of the crystal blue waters, divers can easily see for miles and capture the beauty of the marine life with underwater photography. The Gulf Stream also makes Ten Fathom Ledge a sort of highway for large pelagic fish that are migrating through the Florida Keys to tropical waters.

Depending on the migratory season, divers are usually able to catch some glimpses of interesting large fish species that can never be seen in shallower dive sites in the Keys. Marlin, sailfish, mahi mahi, barracuda, snapper, grouper, snook, tuna, and a variety of sharks often are seen moving through the Gulf Stream to migrate or hunt. Within the abundant caves and crevices, it is common for eels, lobsters, grunts, yellowtail, oysters, crabs, and spotted eagle rays to poke their heads out in greeting too. With all of the plentiful marine life inhabiting and swimming through Ten Fathom Ledge, it is guaranteed to provide an intriguing underwater adventure for all.

Within the Ten Fathom Ledge dive site, there also stands the 75-foot tugboat wreck known as All Alone. Since it is resting on the ocean floor in 90 feet of water, it is recommended that only advanced divers attempt the trek down to explore it up-close. Although the wreck is not very immense, it is popular because of the many large sea creatures that have made the artificial reef their home. For those that are beginner or intermediate divers, there are still plenty of sights to explore in the beautiful, shallower areas of Ten Fathom Ledge until you are ready for the deeper waters.