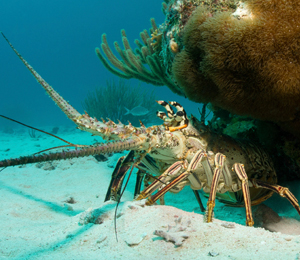 If you come across the spiny lobster during your Key West diving or Key West Snorkeling experience, you may think that it is a true lobster at first glance. However, upon closer inspection, the difference between the two is easy to spot. You might think the "spiny" lobster is named as such for its shell, however, the name actually refers to large, thick, spiny antennae. The antennae are very long, and extend out in front of the lobster, and then curve to the back, almost like an exaggerated mustache. Also, the spiny lobster does not have any claws, unlike the true lobster. The only exception to this rule lies with the females. Spiny lobsters have five sets of walking legs. Males do not have claws on any of them, but females have tiny claws on the fifth set. Another interesting feature about this species of lobster is that it is furry. In fact, it is a member of the "furry lobsters" species group, which was once classified as their own family. Also called the rock lobster, the spiny lobster is found in the Caribbean as well as the Mediterranean, Australia, and South Africa. In the latter two regions they are most often called crayfish or crawfish, although these terms also refer to a freshwater fish in other regions of the world. The appearance of the spiny lobster is very exotic and beautiful as it generally has a bright red or pink appearance.