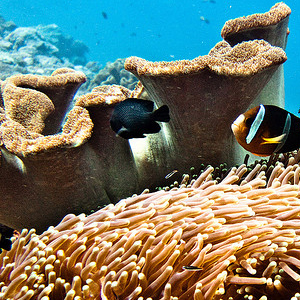 The Florida Reef boasts three distinct types of coral reef communities within its system. Closest to the shore of the Florida Keys is the hardbottom community, made up primarily of algae, stony corals, and sea fans. Further out within the shallow waters are the patch reefs, formed by coral that originally grows on a hard bottom but then grows upward within the shallow waters and then re-establishes new growth on the skeletons of the dead coral beneath them. Furthest out are the bank reefs, which are larger than patch reefs and thrive in the deeper waters; bank reefs also create habitats for tropical reef fish such as Angelfish, Parrotfish, and Triggerfish. The reef also is home to Spiny Lobster, Nurse Sharks, Turtles, and stingrays.